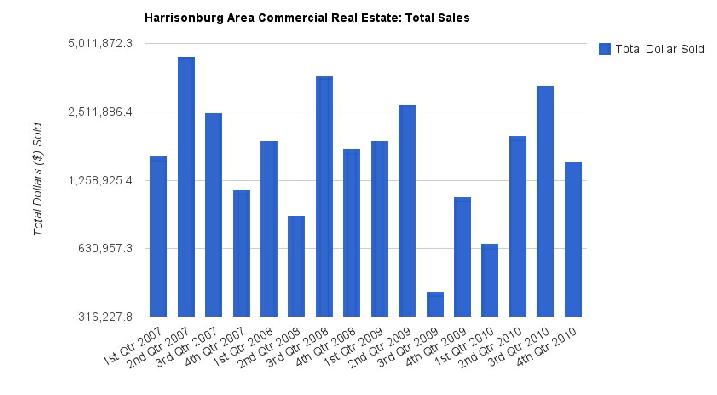 Commercial real estate sales continued to increase year-over-year in the fourth quarter of 2010. Year-over-year total sales (excluding land) for the 4th quarter realized a 43% increase. This was the highest percentage increase since 2008, which came in at a 52% increase from 2007 levels. Total sales for the quarter were just over $1.5 million helping to push 2010 sales volume for the year to its highest level since 2008. This percentage increase was driven primarily by investors and businesses targeting property in off-the-market transactions. In other words, purchasers were not in the mood to compromise in the selection process. If the building met investment criterion or fit business needs exactly, and if the seller not actively marketing the property was receptive to the offer, a sale occurred.

While it might seem counterintuitive (as some may view it as timid investment), I believe these targeted transactions are indicative of a bullish signal within the local commercial market. A similar mentality has been evidenced in investment grade commercial property throughout the nation (often referred to as NNN or Triple Net). This time last year investors were solely focused on ‘treasures’ or ‘traumas’ — properties that were either top-notch quality or significantly discounted due to sellers in distress, and there was no appetite for assets in the middle of the spectrum. However, as the economy has slowly healed, investors have shown a willingness to take on property with greater perceived risk. This has brought more investors into the market and has started to drive down capitalization (cap) rates, which, has in turn, brought additional investors into the market as they do not want to miss out on the apparent bottom.

If the local market follows a similar trend line, I would expect we would begin to see greater transaction levels in 2011 followed by a closer position to normalcy in 2012.