1. where did they come from?

2. why is the food at food trucks better than the food in restaurants, at least when it comes to tacos?”

Tyler Cowan, an economist and author, presented the best theory explaining the origin and need for a taco truck I have seen to date, suggesting:

“Taco trucks are mobile, and they often serve construction workers, who are themselves mobile in terms of choosing various workplaces over the course of a year, and thus they require mobile sources of food.  This encourages the taco truck, but not the stationary restaurant, to invest in better and more authentic food.”

Using his theory, we can see Harrisonburg was at its peak for taco truck inflow around 2007. Tacos El Primo, which has two locations(?) in Harrisonburg arrived in 2004, which can mean only one thing—taco truck owners are the best predictors of an improving economy. Not only did the taco trucks in Harrisonburg predict an uptick in the economy in 2004, but they also correctly forecasted a down cycle in 2007 as evidenced by the lack of new taco trucks. 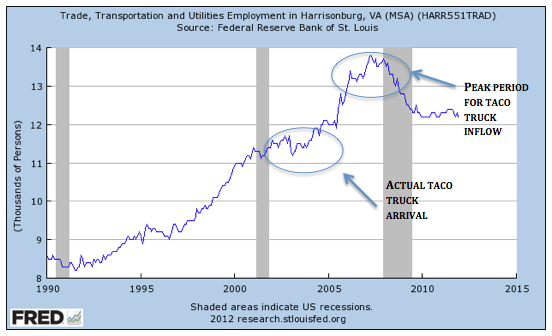 Recently, a taco truck popped up in Broadway in the parking lot of the old Ford dealership. It seems obvious from the data presented that we must be heading for another peak in economic productivity and prosperity is forthcoming. The evidence is just too overwhelming to ignore.

Now…that has been settled and we can move on to the second question. What exactly makes the taco truck the most ideal environment for producing excellent a tasty taco?

Salmon’s favorite theory “is that it basically comes down to the amount of time that elapses between the taco being made and the taco being eaten. Fillings can stay warm and delicious for a while, but the tortilla really is at its very best within seconds of coming off the stove, rather than getting soggy at the bottom of a tortilla warmer brought to you by your server. I suspect that if you could walk into the kitchen of a decent taco restaurant and get the chef to make you one then and there, it too would taste better than the same taco ordered off the menu.”

Maybe this is the best explanation, maybe not. Based on the reviews in the area, it seems taco trucks are not only excellent predictors of the economy, but can also produce one tasty taco superior to all other culinary experiences.

Up next in this series of articles—what the donut tents on Route 42 can teach us about the European debt crisis.

PLEASE NOTE: This post was written as a joke and should not be taken seriously.