A Tale of Two Sides 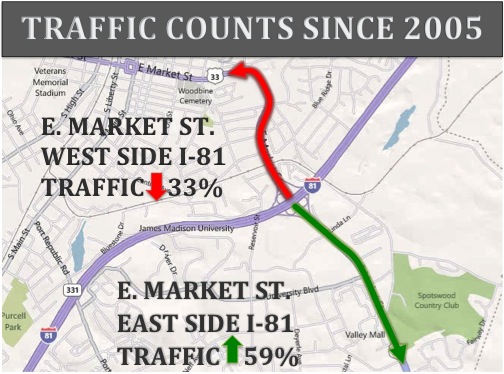 In 2005, the traffic count on E. Market Street was fairly uniform. Approximately 25,000 vehicles travelled down the commercial corridor on a daily basis. However, over the past five years, that has changed with traffic on the east side of I-81 increasing 59% while the west side has shed about 33%.

The root cause of this is undoubtedly connected to the increased residential development on the east side of Harrisonburg and JMU’s growth, but it can be safely assumed that there is a little more to the story. Over this same period of time, a number of national retailers have located (or relocated) to the stretch of E. Market street between I-81 and University Boulevard. In my conversations with national and regional chains, it still remains the most desirable section of Harrisonburg.

Conversely, very few national chains have opened up shop on the western portion of E. Market street and many have indicated that it is not even being considered as an option.

So what happened? It would seem that during a time in which downtown has continued to draw more and more consumers that the primary route to this destination would reflect the popularity in the form of greater traffic counts.

The answer would seem to be that downtown has witnessed increased traffic, but those consumers are not using E. Market street (at least the western portion of E. Market) to get there. Instead, Reservoir has replaced this section of E. Market as the route of choice with traffic counts increasing 38% in sections serving as an alternate route to downtown.

This trend to Reservoir could signal new opportunity on streets connecting it to E. Market. University Boulevard may be the big winner.

Did you enjoy this information? Sign up below to have market reports, sales alerts, and additional articles delivered to your inbox.

Tim Reamer specializes in investment real estate and general commercial representation for Cottonwood Commercial in Harrisonburg, Virginia and throughout the Shenandoah Valley